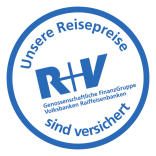 Walk in the footsteps of European artists and masters. Visit places and sources of inspirations.

We organize your special art group tour including workshops with artists, performance arrangements for amateur music and dance groups, exchange and get togethers with local music groups, participation in music festivals and amateur music contests. Music groups will have the opportunity to participate and demonstrate their talents in public performances and to participate in local music festivals.

Arrive at the airport in Frankfurt.

Travel along the picturesque Romantic Rhine Valley with optional stops, e.g. to see the famous Loreley.

Bonn is birthplace of the famous composer Ludwig van Beethoven and last residence of Robert Schumann. Enjoy a guided walking tour including visits to the Beethoven House and the Schumann House.

Excursion to Cologne. Cologne has been at the very center of German history ever since it was founded by the Romans two thousand years ago. The Roman-Germanic Museum houses many relicts of the Roman colonization of Germany. The most important sight is the Cathedral, one of the world’s great Gothic churches.

Meet with young local musicians for exchanges or attend an exclusive concert for your group at the Beethoven House Bonn.

Continue to Leipzig which enjoys a fine reputation in the music world, thanks to the Choir of Thomas Church (Thomanerchor), the Gewandhaus Orchestra, and the Mendelssohn-Bartholdy National College of Music. Johann Sebastian Bach was cantor of the Thomas Church (Thomaskirche) for 27 years and is buried in Leipzig.

En route lunch stop in Eisenach. On the top of the city you will find the well known castle of the Wartburg. This castle was the residence of Luther during the time he translated the bible from Hebrew and Greek into German. Visit the Bach House in Eisenach and the Georgenkirche, where Bach was christened. Georg Philipp Telemann was concert and court conductor in Eisenach.

Guided city tour to learn about the life and works of Bach, Mendelssohn and Schumann in Leipzig. Chamber concert visit.

Day excursion to Weimar where Bach lived and worked and where you will visit the Franz Liszt Museum. Weimar gained cultural importance when in 1775 the Duke of Saxe-Weimar called Johann Wolfgang von Goethe to be his councellor and minister. In 1799 Friedrich von Schiller moved to Weimar, too.

Enjoy a 3 hours guided sightseeing tour featuring some of the highlights of the German capital. Visit Berlin philharmonic hall, the concert hall of the famous “Berliner Philharmoniker” and learn about the orchestra and its famous conductors.

Day excursion to Potsdam including a visit to Sanssouci Palace (or New Palace) and the expansive castle gardens.

Concert visit to a summer music festival which takes place in the castles and gardens in and around Berlin and Potsdam.

Dresden, once called “Florence on the Elbe” because of its numerous baroque buildings still offers a lot to the visitor. The Zwinger, the old palace is the main attraction followed by the Hofkirche (court church) and the Semper Opera. Music enthusiasts all over the world are familiar with Dresden. This is not least due to the guest performances by the Dresden Philharmonic Orchestra and the Sächsische Staatskapelle working at the famous Semper Opera House, the Dresdner Kreuzchor and Dresdner Kapellknaben choirs.

Enjoy a 3 hours guided tour of Dresden. Visit the Semperoper (opera house) and the Zwinger palace. See the Silbermann organ at the Hofkirche cathedral.

Open-air concerts and musical evenings can be enjoyed in the Baroque atmosphere of the old town and in Dresden's palaces and parks.

Proceed to Salzburg via Bayreuth. Guided walking tour of Bayreuth to learn about Franz Liszt and Richard Wagner.

If any city can claim to be the capital of music, it is the Mozart town Salzburg - many renowned composers contribute to the Salzburg Music Festival. Guided walking tour of the city including the beautifull Mirabell Gardens, St. Peter's Church, the Residence, and the 11th Century Hohensalzburg Fortress which dominates the city from its hilltop location. Visit Mozart's birth place, the Mozart House.

Vienna, the city of the waltz and home of many famous composers - Haydn, Mozart, Beethoven, Schubert, Brahms, Bruckner, Mahler and Johann Strauss are the most celebrated. In Vienna, Lehar and his contemporaries created the sparkling genre of the operetta, and Schönberg, Berg and Webern went far beyond traditional structures in their twelve-tone creations. In Vienna there is always a wide choice of performances to attend and music to hear: from the State Opera and the Philharmonic to operetta and musical, from waltzes and the songs of the wine gardens to jazz and pop.

Half day guided tour of the city to see both, the Pest and Buda embankments of the Danube stretching from the Liberty Bridge all the way up to the Margaret Bridge. Visit the Castle district where the historical town district is situated.

The work of renowned composers such as Béla Bartók, Zoltán Kodály or Franz Liszt make the Hungarian classical and folk music famous all around the world. Visit the Liszt Museum which is a reconstruction of Liszt's last Budapest flat on the first floor of the old Academy of Music, where the composer lived between 1881 and 1886, and the Béla Bartók Memorial Museum.

Enjoy a concert at one of the many theatres or concert halls.

En route visit Bratislava. When walking through the old town, you will notice a series of memorial plaques on the walls of the various palaces, often displaying Bratislava's links to a rich history of classical music. Some of the most significant composers are known to have played their sonatas at the homes of Bratislava's noble families. A six-year-old Wolfgang Amadeus Mozart is believed to have given a concert on Ventúrska Street, a nine-year-old Franz Liszt performed in what is now the university library. During the 18th century, Haydn worked as a Kapellmeister (bandmaster) for Prince Nikolaus Esterházy in one of Esterházy's palaces on Kapitulská Street. In 1772, Haydn conducted the wedding ball of Queen Maria Theresa's daughter in Grassalkovich Palace, today's seat of the Slovak President.

***Tour suggestions can be adapted to your wishes.